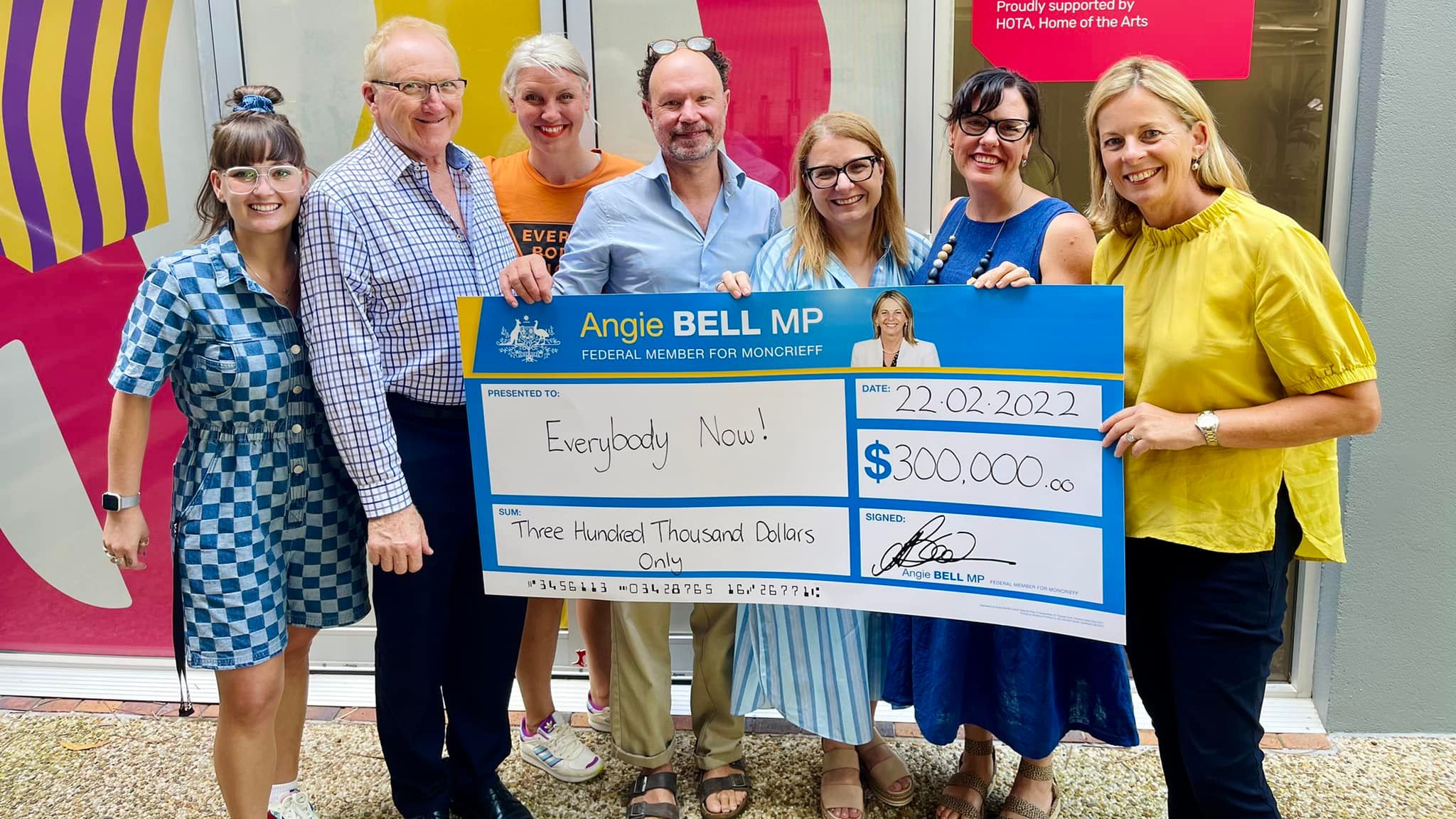 Future Bright for Everybody NOW!

After what has been a rocky few years for the arts industry, Gold Coast performance company Everybody NOW! are moving into a flourishing future thanks to securing three tiers of Government investment to strengthen the company’s capacity to 2025.

Everybody NOW! is a community-engaged performance company, dedicated to the creation of high-quality art projects that are created on and from the Gold Coast as well as reaching out to collaborators and communities nationally and internationally.

Since founding in 2015 the company has established itself as a leader in contemporary community engagement and have reached nearly 50,000 people in 121 communities across five states of Australia, between the ages of three to 99 years.

The company was created after the Gold Coast’s signature arts festival Bleach, commissioned Everybody Now! Artistic Directors to develop a new dance and theatre show called, The Inaugural Annual Dance Affair in 2015.

The City of Gold Coast has also been supporting Everybody Now! since the beginning, with project funding and more recently providing operational funding through the Arts Organisations Triennial Funding Program.

“I have always deeply valued that early backing from Bleach Festival and the City of Gold Coast which gave us the confidence and support to try something new. At that time, we had no resources or funds, just a great idea and a great group of artists by our sides. That show has gone onto tour nationally and is still touring, generating important work and relationships for the company” said Kate Baggerson Executive Director Everybody Now!

“It was such an exciting time on the Gold Coast in that period leading up to the Commonwealth Games. We believed this kind of socially engaged work could play an important role in contributing to the local arts and cultural scene and audience development, both then and into the future. That’s when we decided to formalise Everybody Now! as a not-for-profit and develop a vision and strategy for the future. The type of arts projects we create is all about telling stories that are important to our communities and finding ways to bring people into the arts that might not have thought it was for them.”

Everybody Now! was commissioned to create a major project, Yes We Dance, as part of the Commonwealth Games Festival 2018 program, which saw thousands of locals and visitors to the Games dancing up a storm on the streets of the Broadbeach Festival Hub, while ten local dancing legends took the starring role.

The company’s efforts to consistently create outstanding artistic works which prioritises real people and real stories has seen their success steadily increasing and attracting further commissions from Australia’s Major Festivals including, the Brisbane Festival and Darwin Festival as well as touring works nationally.

In 2021, Everybody Now! announced a three-year partnership as a HOME Company at HOTA Home of the Arts on the Gold Coast and secured Arts Queensland organisational funding as one of 14 new entrants to the funding program, sharing in $33.5 million dollars of core funding.

To round out their co-investment, Everybody Now! were most recently successful in securing Restart Investment to Sustain and Expand (RISE) Funding through the Australian Government which supports Australia’s arts and entertainment sector as it continues to recover from the interruptions to live performances due to COVID-19.

Member of Moncrieff Angie Bell MP recently presented the company with a cheque for $300,000 at their new offices at HOTA Home of the Arts, to celebrate their success and contribution to the local cultural economy and social impacts to the city.

Ms Baggerson said, “The RISE fund will support the delivery of a two-year program for South-East Queensland engaging audiences and artists in participatory performance making. As a company based on the Gold Coast it is incredibly important to us to nurture our relationships with artists, communities and partners in our own backyard alongside our national touring and work with communities throughout Queensland and Australia.

It’s a really exciting time for our company and collaborating communities. We passionately believe there could not be a more important time to bring people together through the arts, to generate joy and tell our stories to each other. With the support of our partners and funders we’re well positioned to boldly realise our purpose – To Move Communities,”

The company is dedicated to the creation of high-quality, community-engaged arts projects that are made with and for community, alongside outstanding professional artists.

Since formation in 2015 they have become known for their inclusive, large-scale social dance works featuring hundreds of community dancers and stories of place told through the sparkly lens of dance.

Their body of work also extends across art-forms, from slam poetry exclusively for over seventies, radio stations for Grandkids and Grandparents, roller derby musicals in the making, to the occasion hosting of a banging party.

They have worked in small towns and on big festival stages from basketball courts to town halls, in schools, aged care facilities, in people’s homes around their kitchen table and with thousands, literally thousands of people dancing in the streets.

The company have a suite of touring works, are regularly invited to create new works and commissions with festivals, arts presenters, local governments and with not for profits, in communities across Australia.