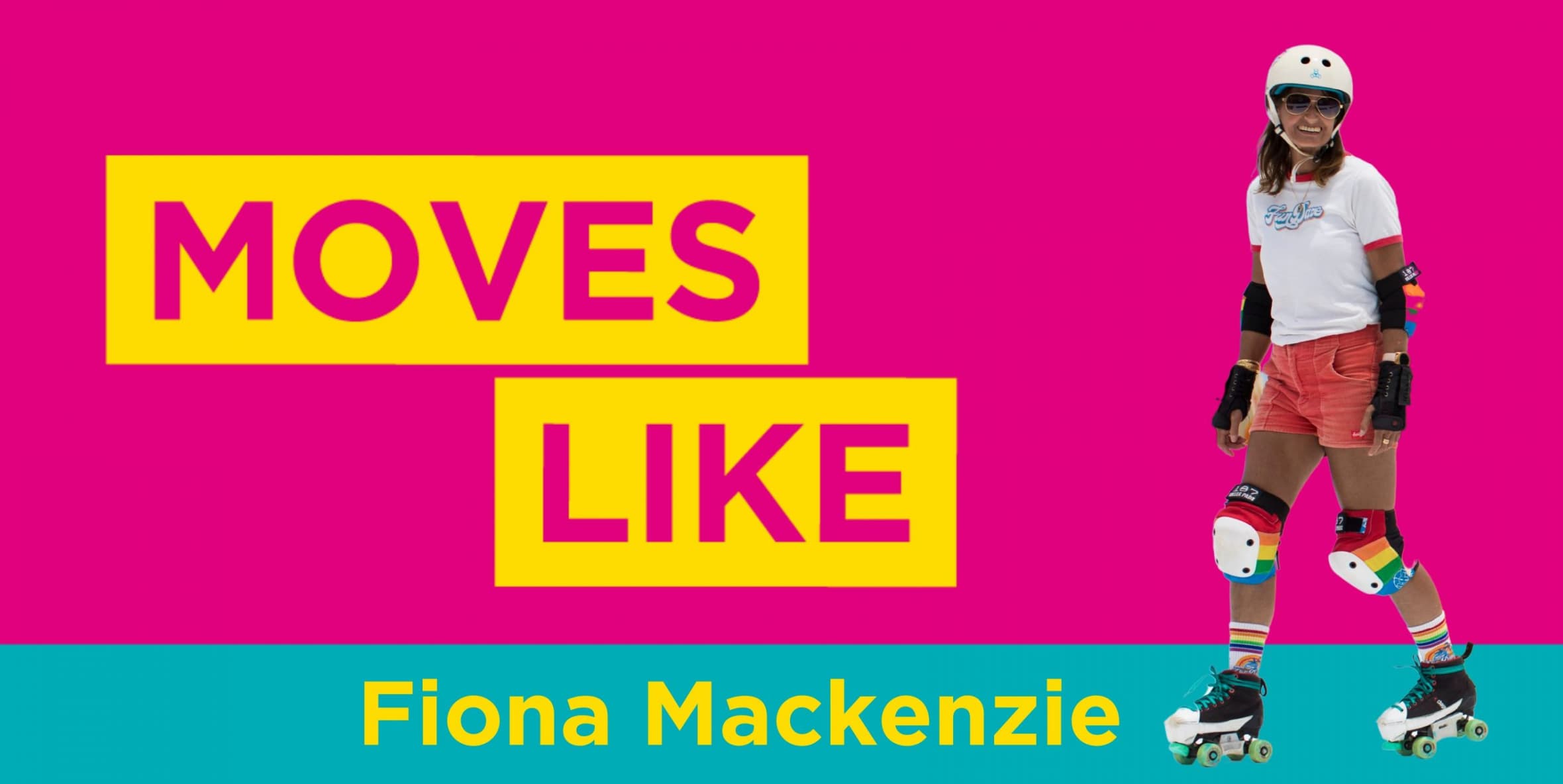 Like many kids of the 80’s Fiona’s world got a whole lot brighter (and faster) when the local Rink opened in her home town. She started skating at 9 and by 11 was in a speed team! After a foray into inline and ice skating (for a good 20 years), Fiona found her way back to quads joining a Roller Derby team, which then rolled around to her newfound love in skate park skating.

She has seen a transformation of women represented in sport and a smashing of stereotypes but a recent tragic event has reminded her of how important it is for girls to find their strength, confidence. and community.

What moves Fiona, is creating a safe community where young girls feel comfortable and free to ask us for help.

Q1. You’ve got a long history with skate – from speed skating, ice hockey, derby and now freestyle park skating – is there something that connects them all that keeps bringing you back to skate?

I think the fact that skating offers so many different disciplines and I was able to stay interested by having a go at each one as they evolved. It is also a small community so often we cross paths with old friends.

My journey started in 1980 when a rink opened in my area “The Big Roller’ at Carlingford NSW so I started roller skating when I was 9. The guys that opened the rink were speed skaters and the kids that skated well there were mostly boys. As I aspired to skate as well as them because the speed skaters were the cool crew. I joined the speed team when I was 11or 12 and got pretty good at it. Skating with the older boys made me faster and I never seem to have lost that skill.

In the 1990’s I ventured into ice skating and ice hockey and then Inline hockey which only had men’s teams at the time so I played in them too. It was the start of non-discrimination that allowed women to be included in the men’s teams. In 1996 I played in the first Australian women’s ice hockey team against a visiting American Junior women’s team.

In 2010 an old school friend got in contact with me and said I remember you were a good skater back in school, you should play roller derby with us. I had just spent almost 20 years on the ice and inline skates so going back to quads was a bit weird. I had kept my speed skates from the 80’s so it was kind of cool breaking them out again. The founder of Tweed Valley roller derby and I started a junior program called Twin Towns derby brats as we both had daughters that were too young to play derby.

The Derby brats led to my connection back to skating and park skating. Some years later after my daughter had finished school and Uni she told me about her friend that was still skating and was into park skating. When I saw what she was doing on roller skates in the skate park my mind was blown. Even with 40 years of skating experience under my belt I had to go back to beginner level. Outdoors I was a total bambi. I was scared to go down hills, I had no idea how to navigate rough surfaces and I certainly had no clue about roller skating in a half pipe. The thought of dropping in off a vertical edge was the scariest thing I’d ever seen.

All of a sudden, I had my skating mojo back.!

Q2. You describe ‘learning to freestyle skate in your late 40’s as exhilarating’. Where does that exhilaration come from?

For me the exhilaration comes from learning something new. Over the years I’ve been involved in numerous high adrenaline sports such as Motocross, barefoot water skiing, Ice Hockey and Surfing.

Its setting small goals and as a beginner in any sport or activity you feel like you achieve new skills every time that you participate.

Q3. How is your experience as a skater shaped by being a woman at this time in your life?

I feel like women now have the confidence to participate in almost any activity because women of my generation and the boomers were breaking the stereotypes. In 1996 I played in the first ever women’s Australian ice hockey team. Women have been fighting for equality in sports for many decades now.

As a roller skater many women that skated as kids are getting back into the sport but we are pretty new to the skate park scene which has always been male dominated. Before the roller skating phase came back I would say there were less than 5% of females skateboarding and less on BMX. Now every time I go to a skate park I see girls there and rollerskating is the dominating discipline for girls at skate parks.

Q4. What do you love most your business Fun Daze?

I love that I have brought a great group of young women together to teach roller skating and we have created a fun culture to work in. We all want Fun Daze to grow so we can be a full-time business.

The coaches and I love the energy the kids put out the emotion and excitement when they learn a new skill. I love watching shy kids make friends. The commandery they share laughing and helping each other to get their skills, it’s a team without the negativity that competition can bring out.

Q5. The Purpose of our organisation is To Move Communities – movement can manifest in many guises; physically, socially, emotionally, culturally. To be moved and to move together. What moves you?

A few months ago we were contacted by one of our students dads that gave us the saddest news we could have ever imagined, his 16 year old daughter took her life. All the Fun Daze coaches attended her funeral in full uniform and skates, we formed a guard of honour as her pink coffin was carried by her dad and brothers to the hearse.

Her passion was roller skating and drawing. My heart was so broken when we arrived at her funeral and saw her pink coffin with her pink skates on top with our Fun Daze Tshirt placed on top too. Its something you could never comprehend when you start a business that it would touch a family so deeply with only a couple of sessions with us. The experience rocked all of us to our core and more than ever we want to help girls find their strength and confidence. We want to be role models and mentors to anyone that needs us.

What Moves me is to provide a safe place where young girls feel comfortable and free to ask us for help.